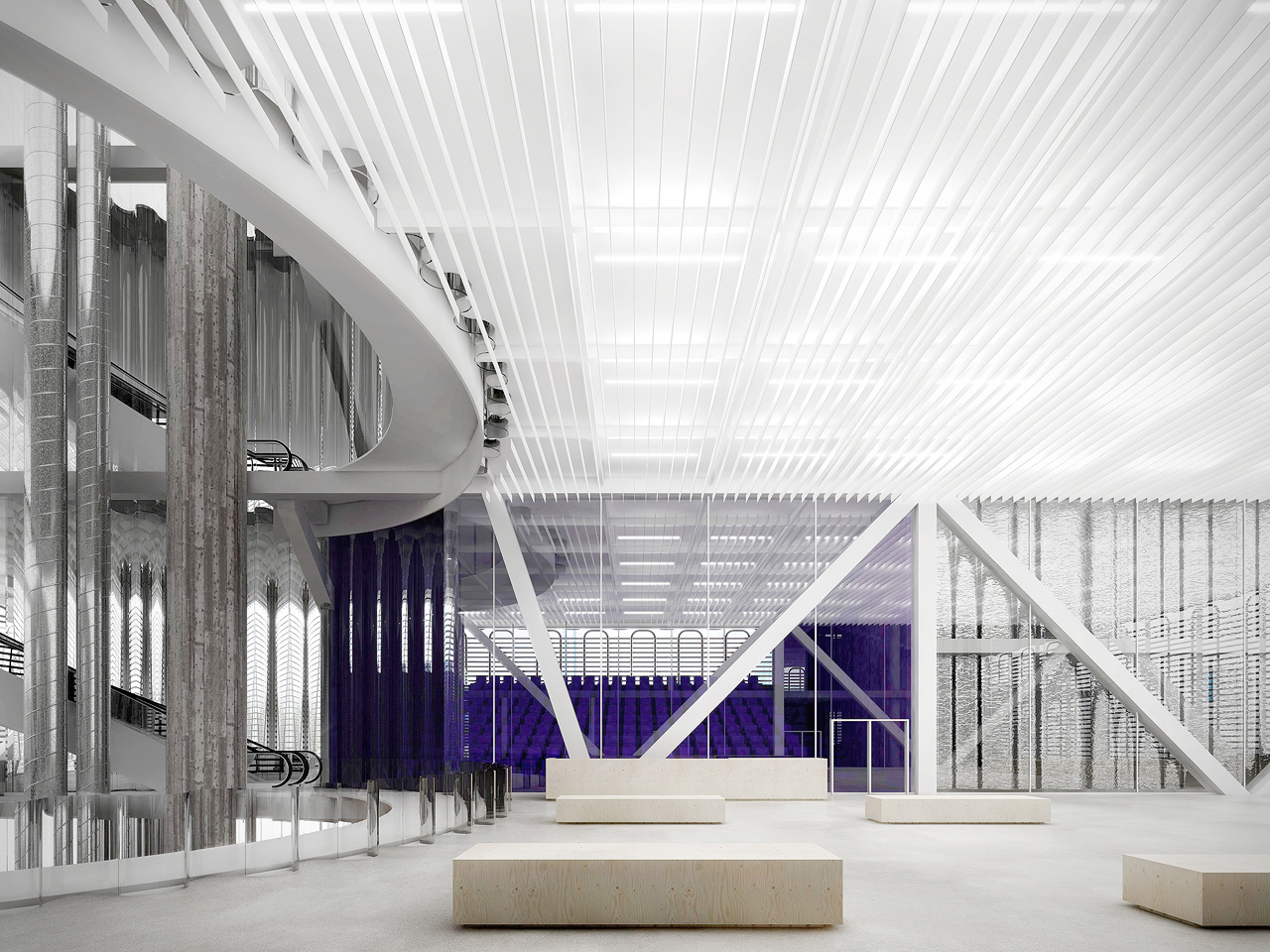 Water from the sun
#plan 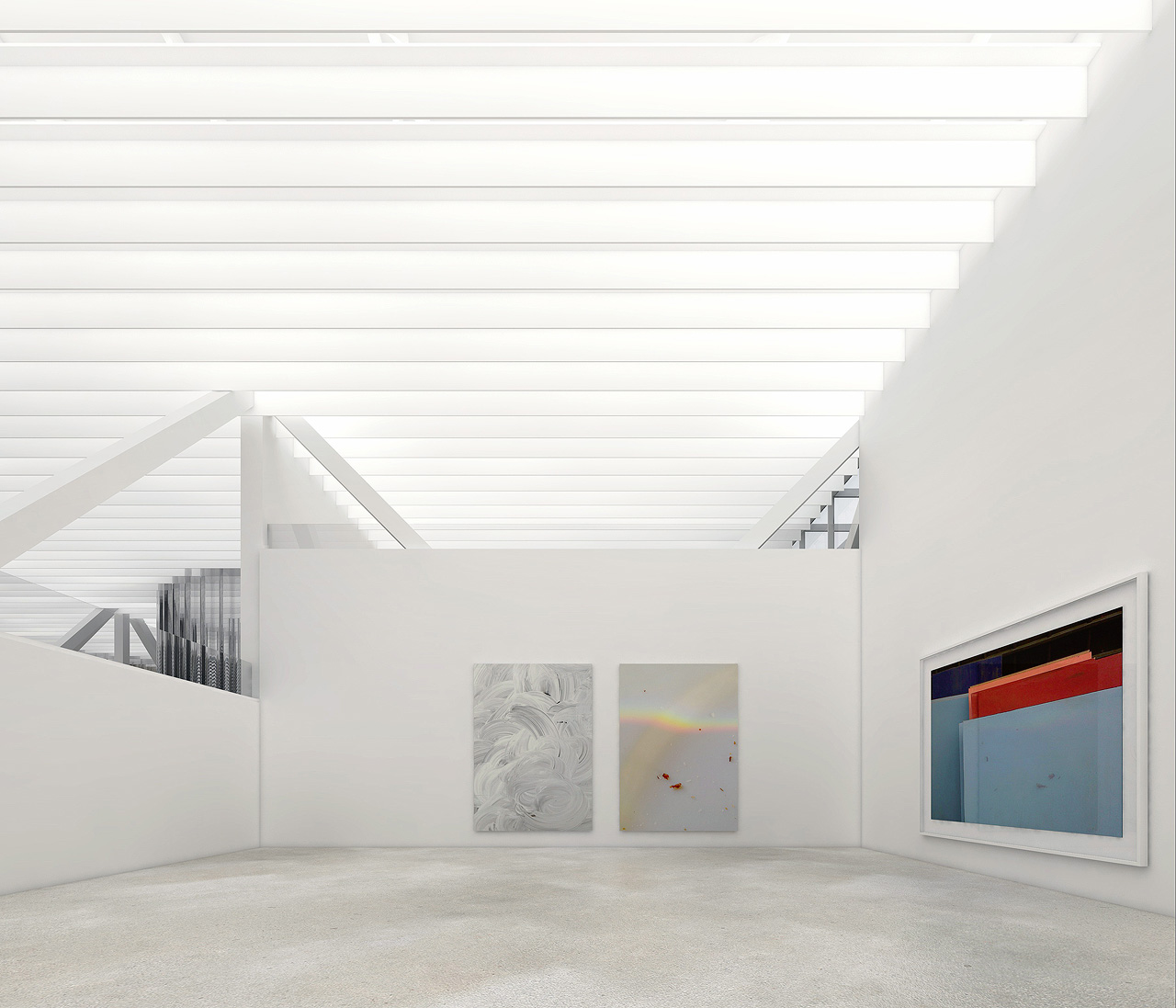 Water from the sun
#art 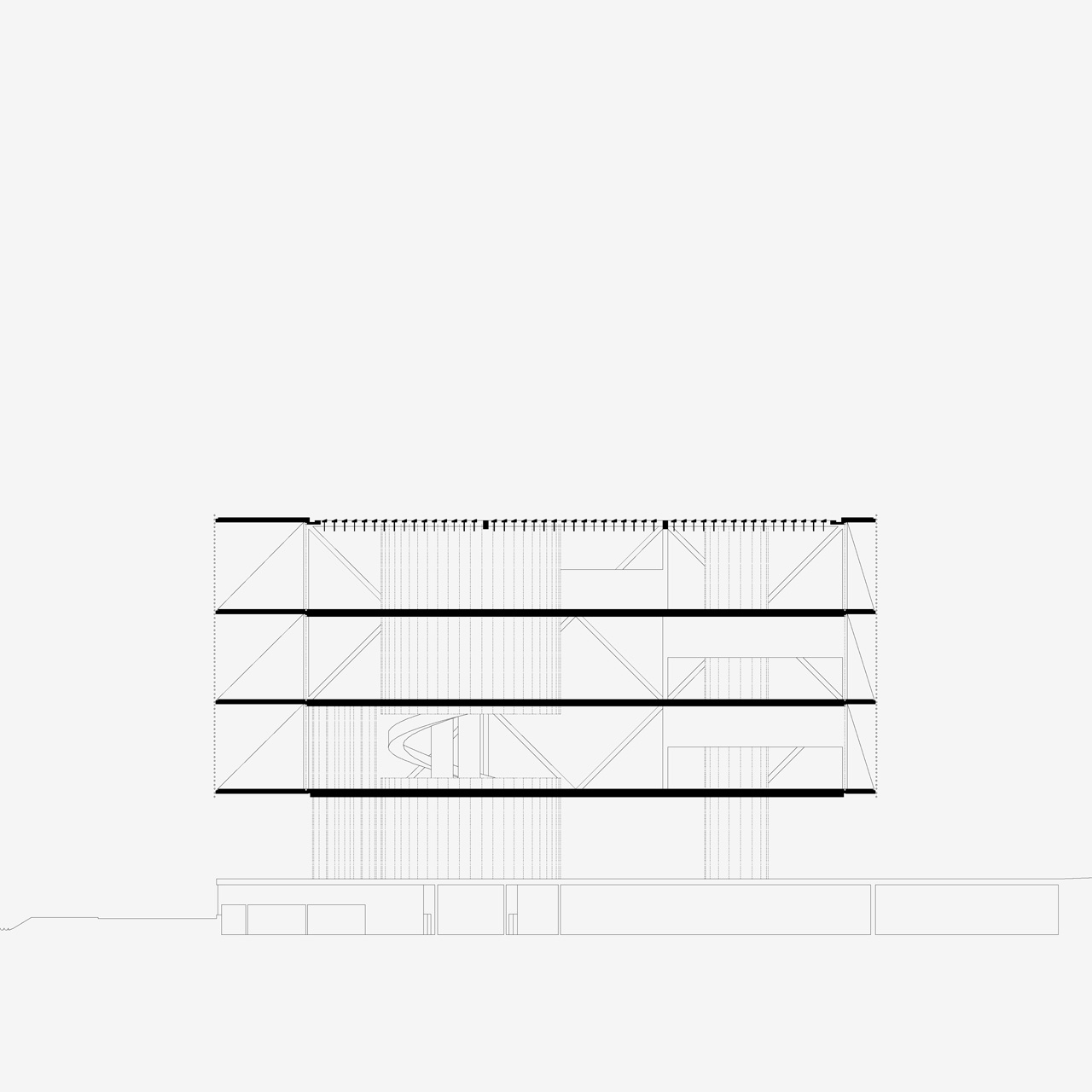 Water from the sun
#section 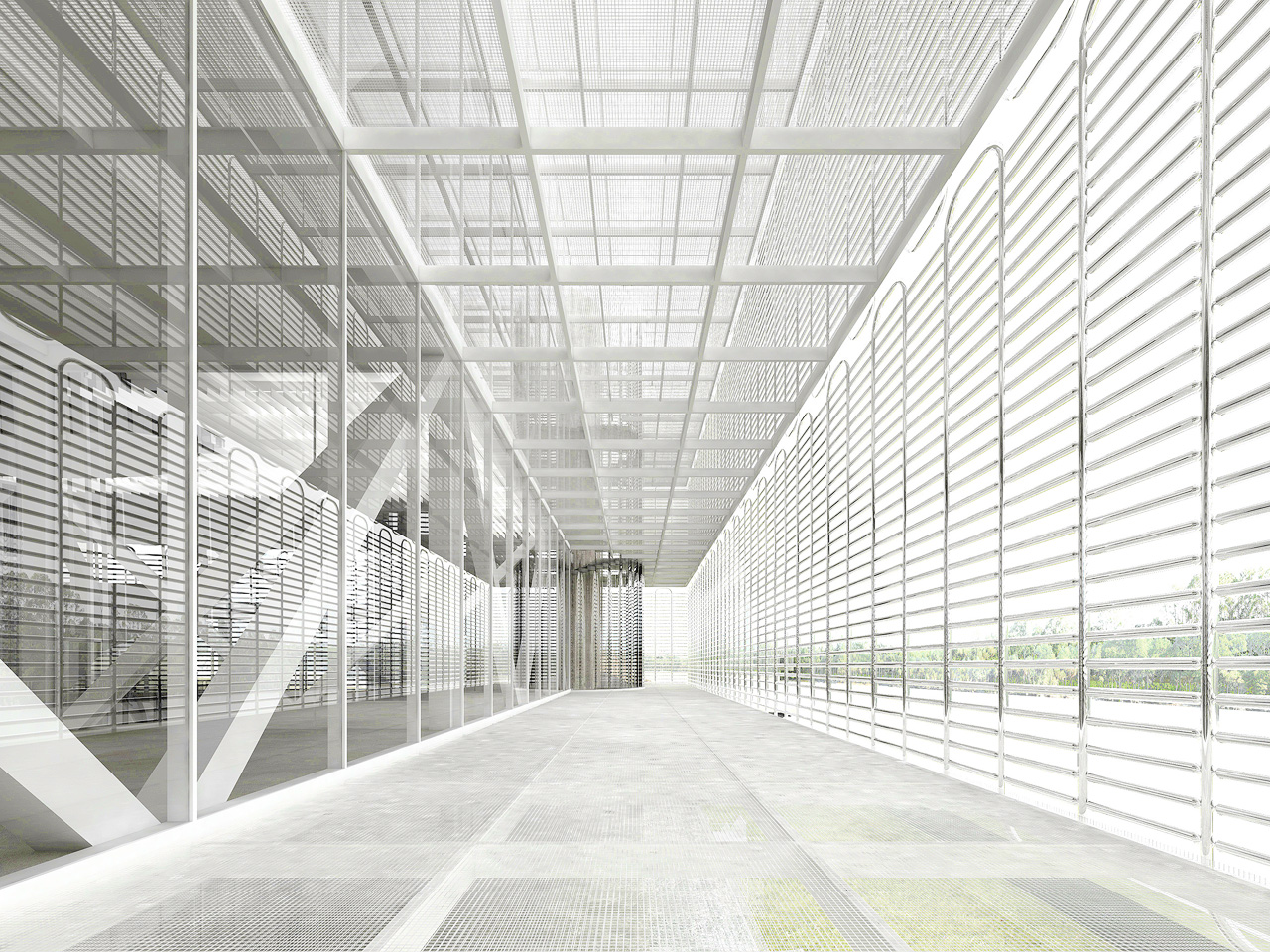 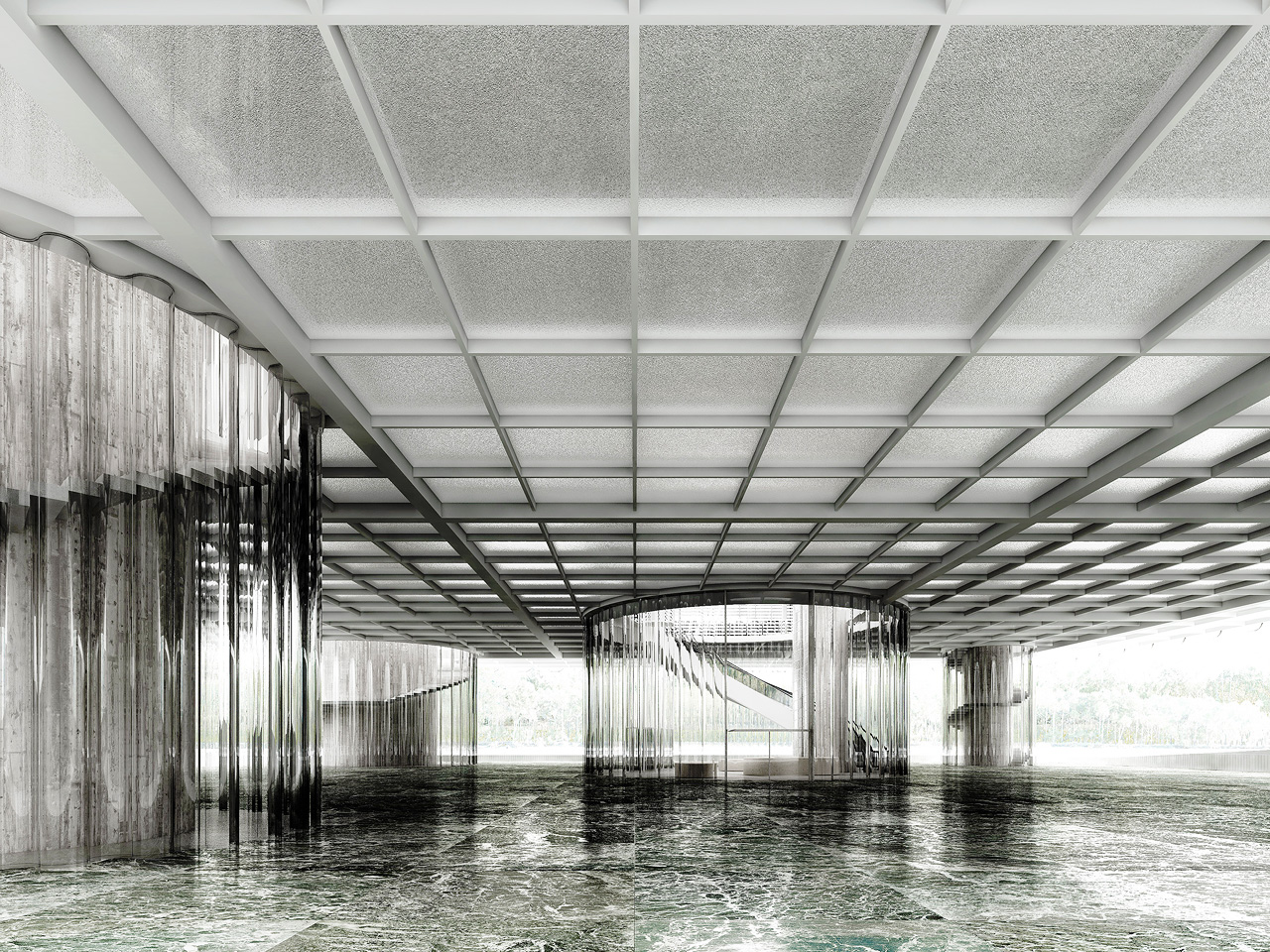 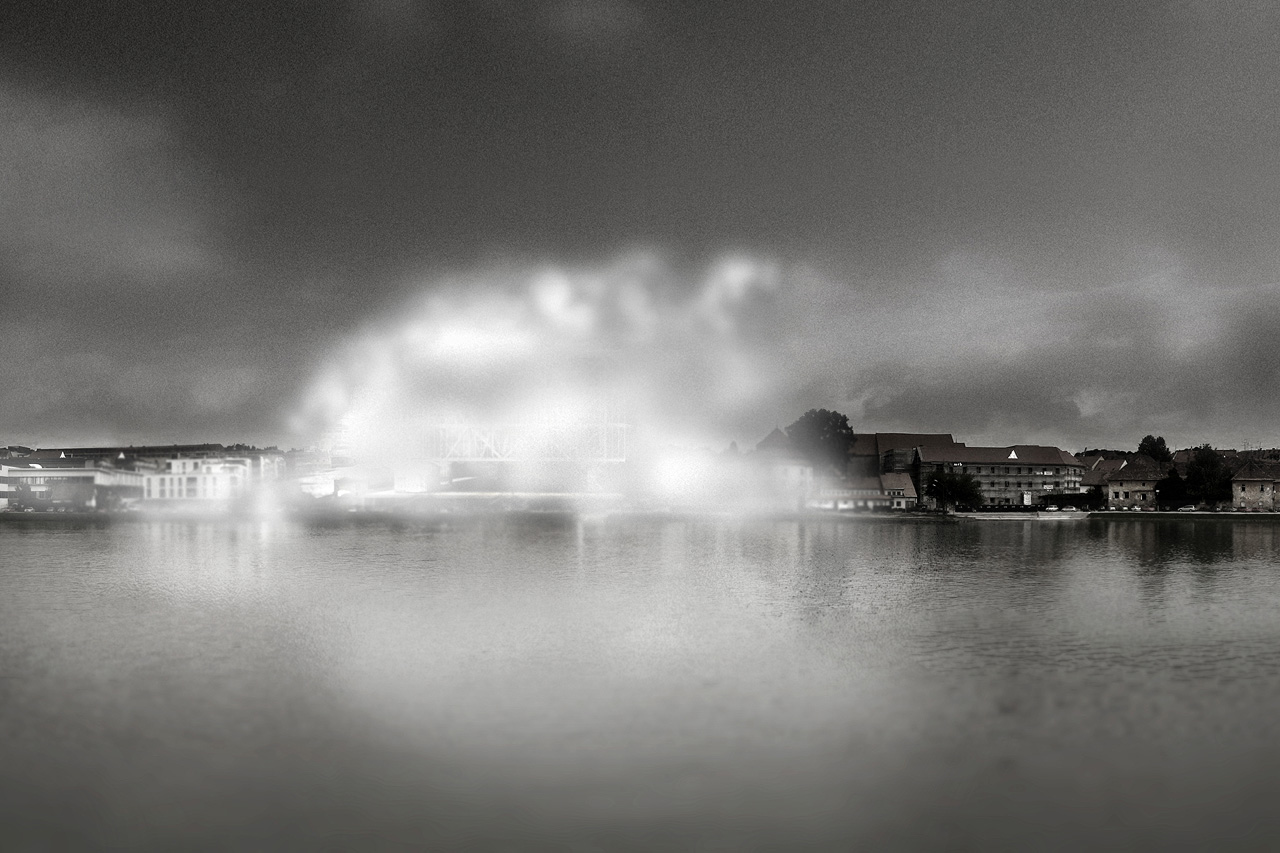 Water from the sun
#humidity 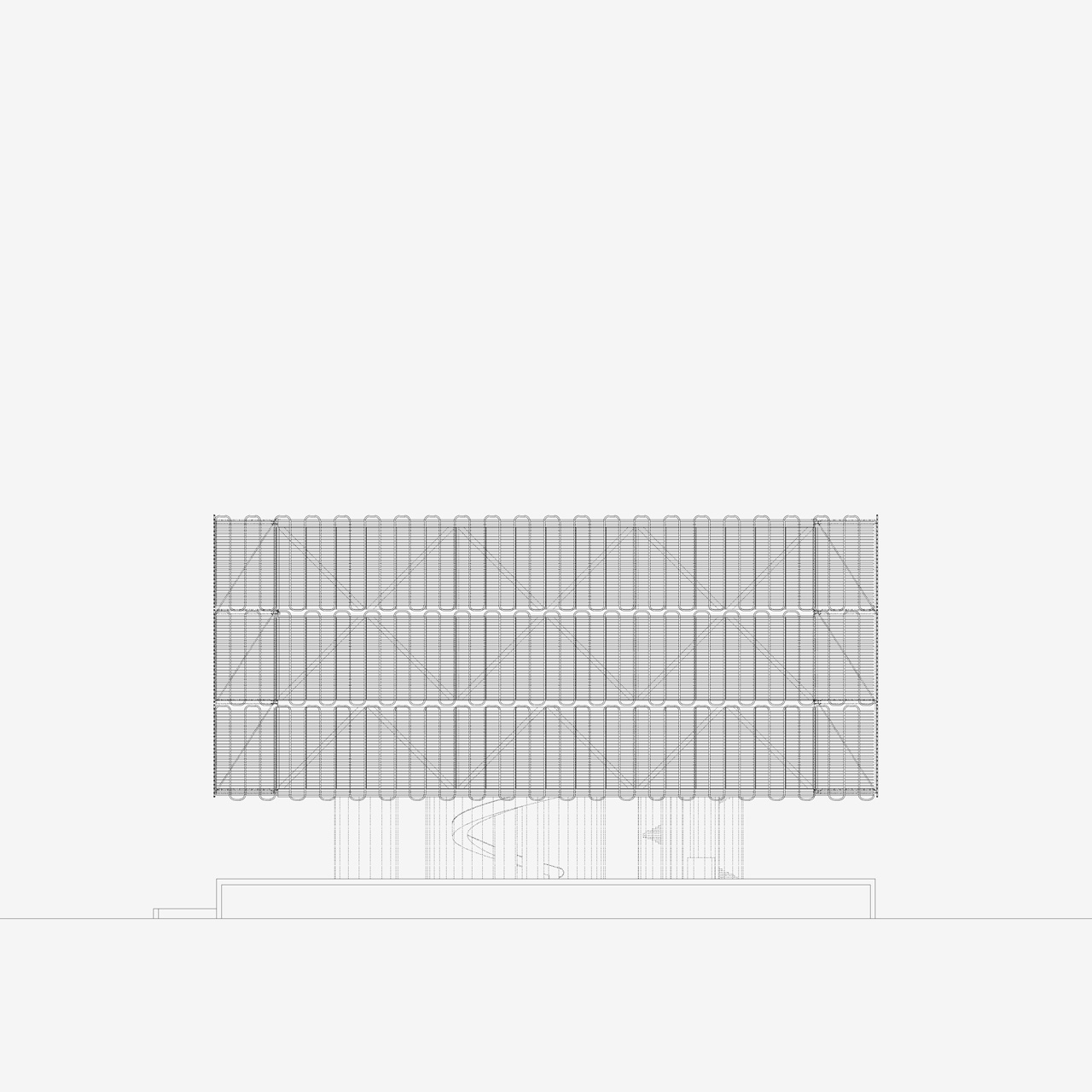 Water from the sun
#façade 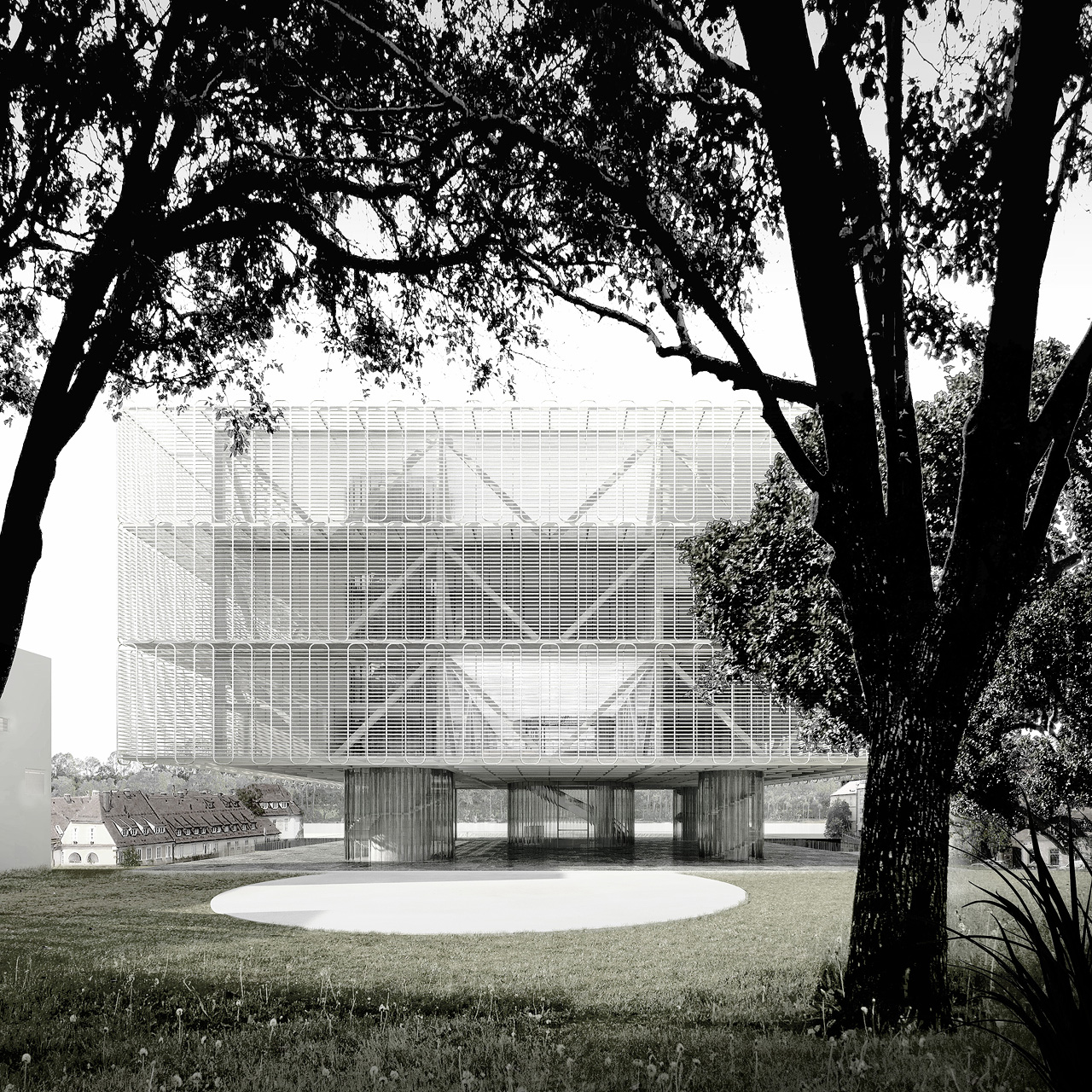 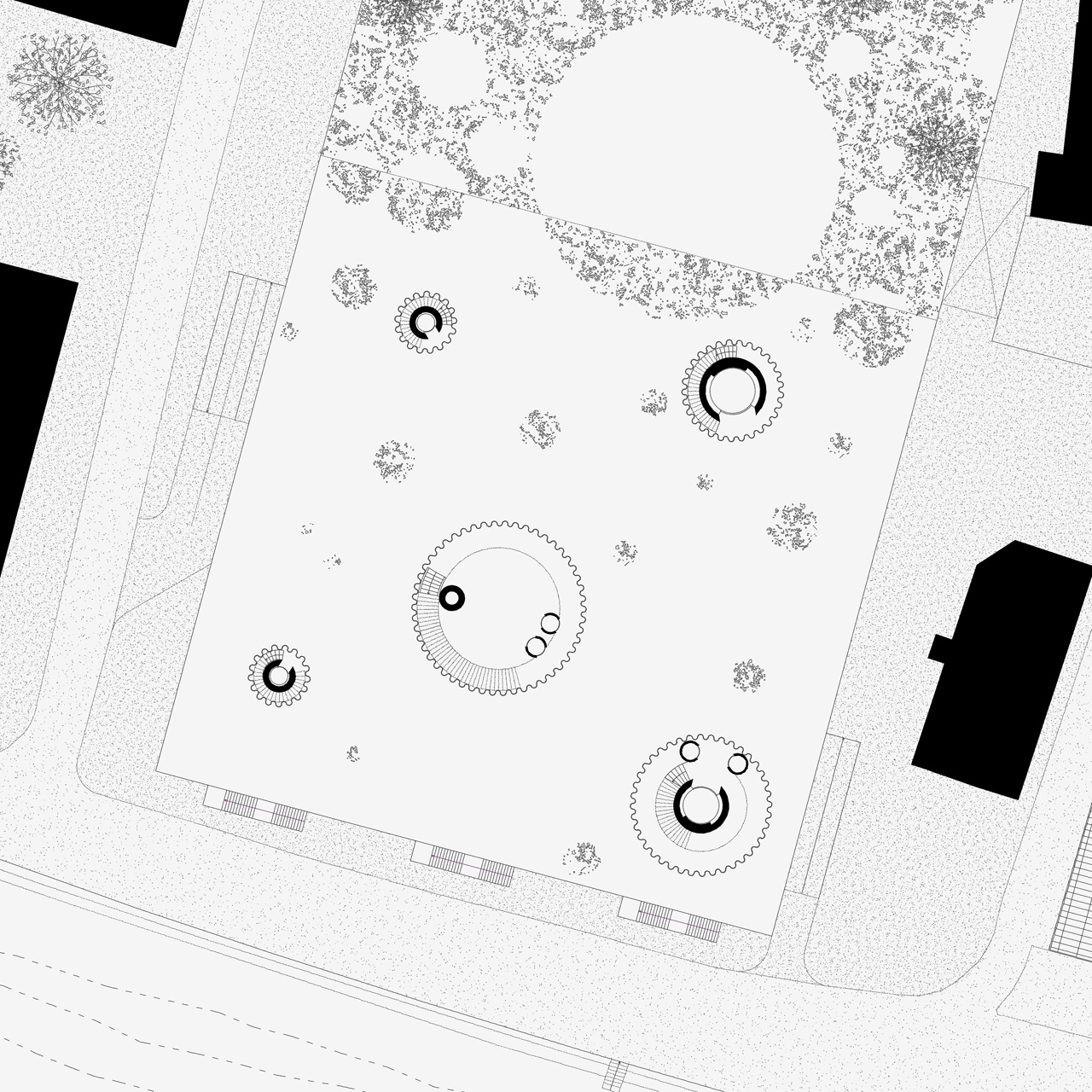 Maribor is the second largest city of Slovenia, north east of the country. Lied on the river Drava, it has chosen to settle its new art gallery on a very central site, between the north bank and Koroska street, a main axis.
From an urban perspective, the critical issue is to create a real connection between the city, the river and the museum. To this end, the project chose to clear a large floor space, an open landscape more than a built density, linking the Drava to Koroska street. The museum will no longer be an obstacle to this route, but rather an urban catalyzer : risen off the natural ground that then becomes a cultural plaza, most of the program crystallizes in an abstract volume, a floating landmark, a technical and oniric art citadel.

The museum north area topography is then modified to accentuate the natural slope and create a large amphitheater, introducing the access to the museum plaza. This plaza, hiding underground programmatic elements whose connection with the bank road is necessary, becomes a privileged sheltered area, a belvedere on the Drava, punctuated by reflections from large corrugated glass tubes and submerged by a strange southern light glittering between the river and a shimmering ceiling, just like a mirage in the desert.

Echoing both the concentric quadrilaterals that define the map of Maribor and the central location of the museum in the city and its different views, the project materializes in this pure squared logic, an abstract and symbolic form of the cultural nature of the place. Even if the climatic orientation is well though and visible in its architecture, its urban orientation does not favor an axis: the museum is central.
The tower of Sodne Stolp is one of the key landmarks of the city. In plan, the museum and park site extends this strong element by creating a structuring constellation of circles with various scales, both in the architecture of the museum and in the landscaping of the park.

The building itself is designed straight from the rationalization of the museum program to three key parameters: volume, circulation, climate. These three factors then define the essence of the project, in a simple and identifiable way.

Thus, the main volume is a sort of Rubik’s cube, 54×54x27m structurally independent box, three-dimensionally triangulated, whose edges are divided into 3 modules (27 boxes : 18×18x9m). Thought of like an accumulation of 27 Brian O’Doherty’s White Cubes, it provides the necessary space for museum activities, uncluttered and bright, opened and accessible. Glazed on all four sides (as protected by a climatic double skin), the volume is over-insulated on the underside by a visible multilayer aluminum foil, and protected on the roof by shading/photovoltaic panels.

Circulations - 5 large vertical tubes - are positioned independently but in order to serve the most logically possible the different areas of the museum. These transparent tubes (corrugated glass, offering greater resistance) allow the connection between the basement and exhibition spaces, between the plaza and the library, between offices and storage, between delivery ramps and the catering area. The two East tubes are reserved for museum staff and bulky items, while the two West ones are used by visitors. The large central tube serves as the main circulation, a landmark, a meeting place shaped like a journey. In its nucleus, each of the 5 tubes features a structural core, wrapping the elevators, that supports the main volume.

Climate is the 3rd founding element of the project. More thought of like a machine rather than an inert space, the museum seeks its materialization in the direct application of its climate control techniques. In the manner of the Pompidou Center, the project pushes outside the technical elements that ensure its functioning, namely an ecological climatic functioning taking into account the natural available resources. By combining various sustainable technologies (solar cooling, heat pump, photovoltaics, cooling mist), the building takes on a new architectural layer, both operating, altering and validating the two previous elements (volume + circulations) already in place. This new meteorological dimension also creates particular spaces and materiality, not determined by a traditional architectural language but emerging directly from a new climatic approach of the program: an active tubular façade also source of energy, micro-climates terraces acting like double skins, a blurred building limit offering new perceptions, etc…
In an attempt to homogenize and stabilize the internal temperature (the storage areas are also placed in the basement, where the climate is more constant), the project can be seen as an isolated box wrapped in a heat-exchange interface, like an ordinary refrigerator or radiator.

Exhibition areas are spread over the last two levels in a large open space. The permanent exhibition space, gathering artworks requiring special storage conditions, is located on the 2nd level, sheltered from light and temperature variations. The Architecture Center, also located on the 2nd level, allows a coherent organization with the permanent exhibits.
Temporary exhibitions are settled on the top floor to take maximum advantage of natural light, appropriately shaded on the roof. In two square modules (18×18m, 324m2) the floor is offset by + /-4m in height in order to promptly identify a ceiling height of 12m, to accommodate works of greater size in each of two levels of exposure.
Both montes charges laid in the tubes is used to deliver works to those floors. Widely open to the outside exhibition areas can expand on 3000m2 of outdoor terraces.

To ensure the climatic balance of the museum, the project uses various sources of renewable energy and thermal vectors.
First, the ventilation of the museum is made through a geothermal heat pump, heating / cooling incoming outside air through an underground canal (+ / - 16 º C) and heat exchange with the extracted stale air. In summer, part of the stale air is evacuated through the roof, by natural convection, reducing air pumping energy consumption and creating in some areas natural air flows. Vertical air ducts are located in the five glass tubes.
Cooling of the museum is provided by an innovative system of solar cooling. The vacuum tubes of the south facade heat the water to a temperature of 80 º C, which is then sent to an adsorption machine (adsorbent: silica gel). Through a vaporization/condensation heat exchange process, cold flow is produced in a separated water circuit. Necessary to the proper functioning of the system, a third water circuit, called coolant (not freezing), is used in this principle and runs through the north facade of the building. Thus, the quantity of cold produced is proportional to the amount of sunshine, making the use of this system particularly relevant. On the other hand, its very low power consumption is counterbalanced by the photovoltaic electric production on the roof.
In winter, the vacuum heating collector tubes can be used to directly preheat the building.
The water system of heating/cooling then runs directly into the thick concrete slabs, ensuring an ideal inertial diffusion for a museum, where sudden changes of temperature are avoided.
Finally, a occasional misting system is included in the technical tubular façade through hundreds of high pressure nozzles, enabling the creation of an artificial cloud from the filtered water from the Drava. This option, used to refresh both the envelope of the museum and its surroundings (bank, park) can be programmed and operated as an event to create unusual situations around the museum that becomes itself dynamic, like a floating cloud, a separated active meteorology in the landscape of Maribor.