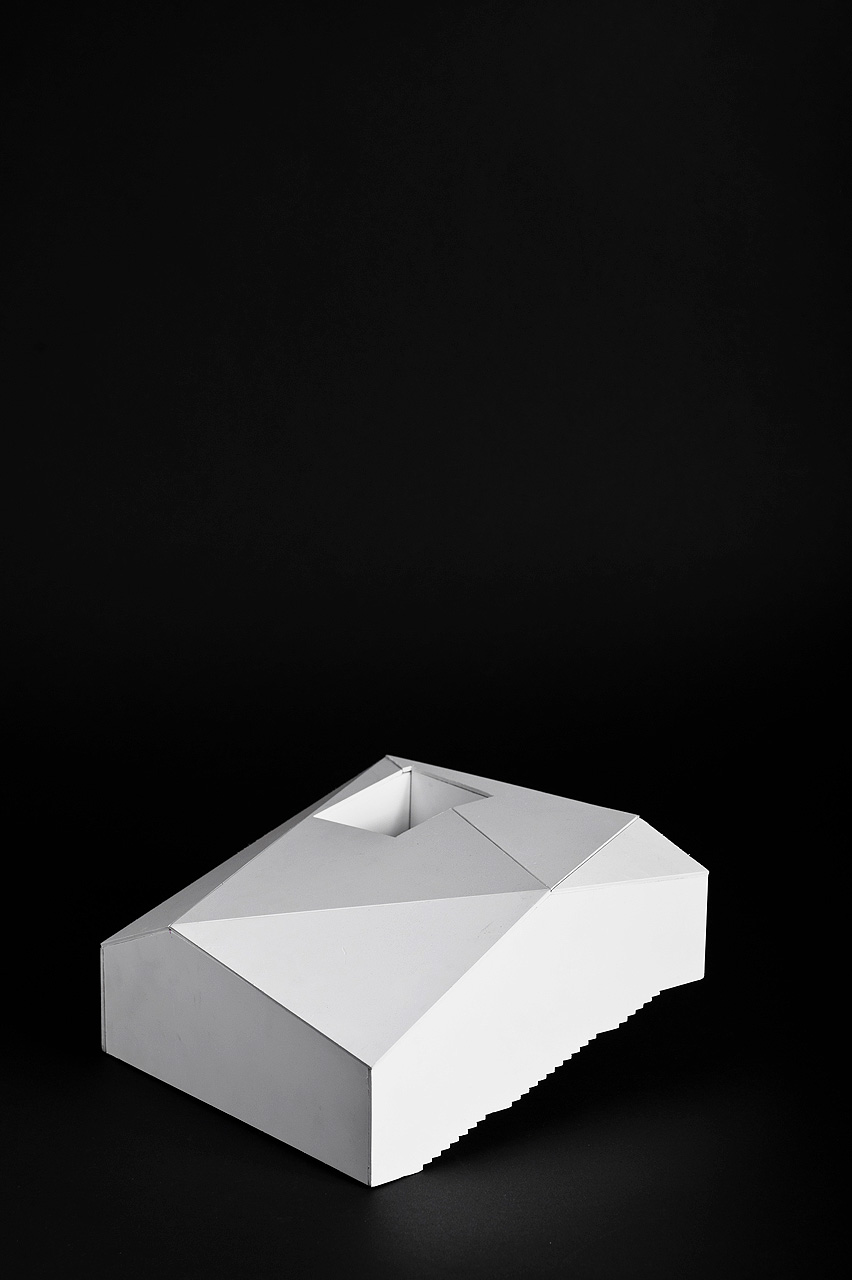 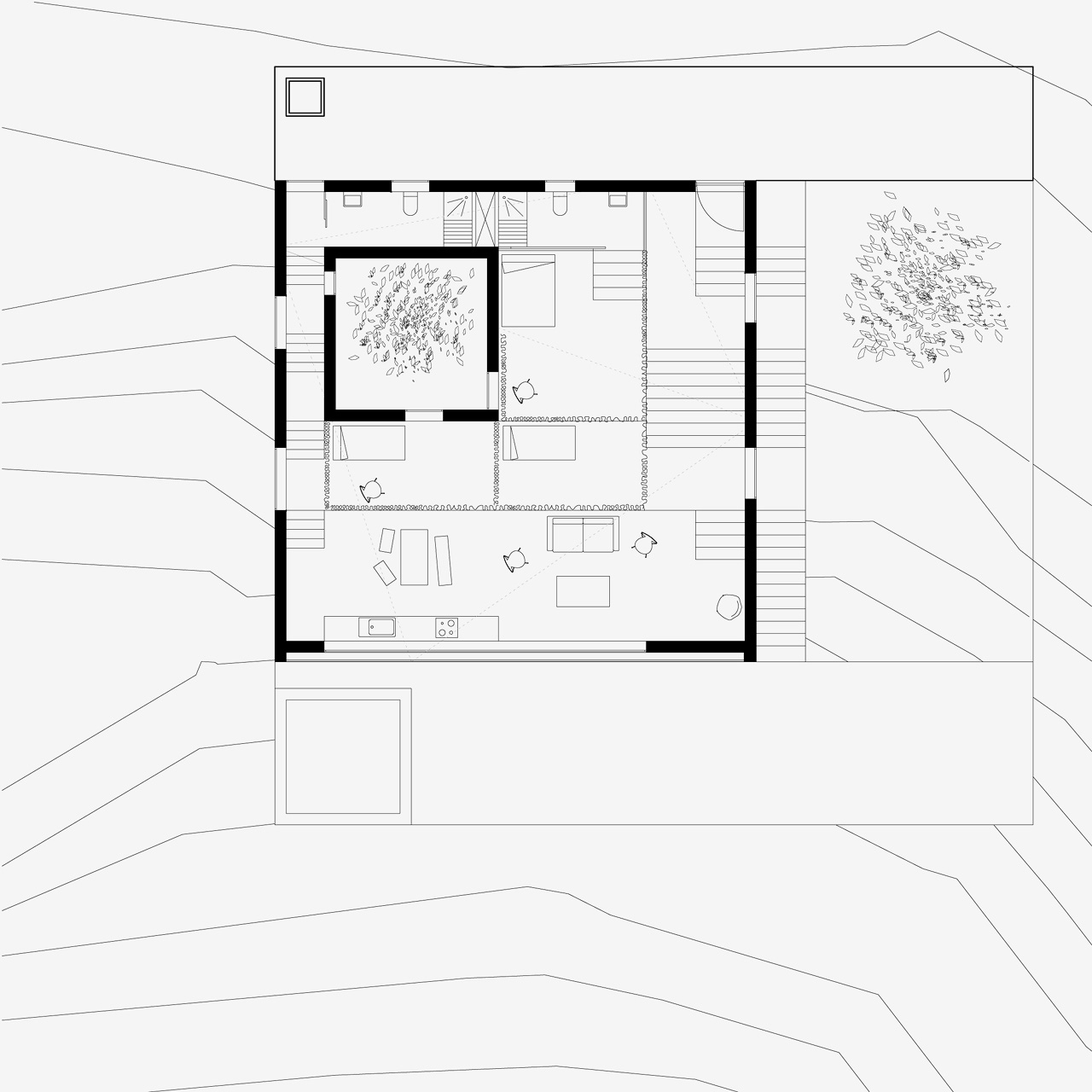 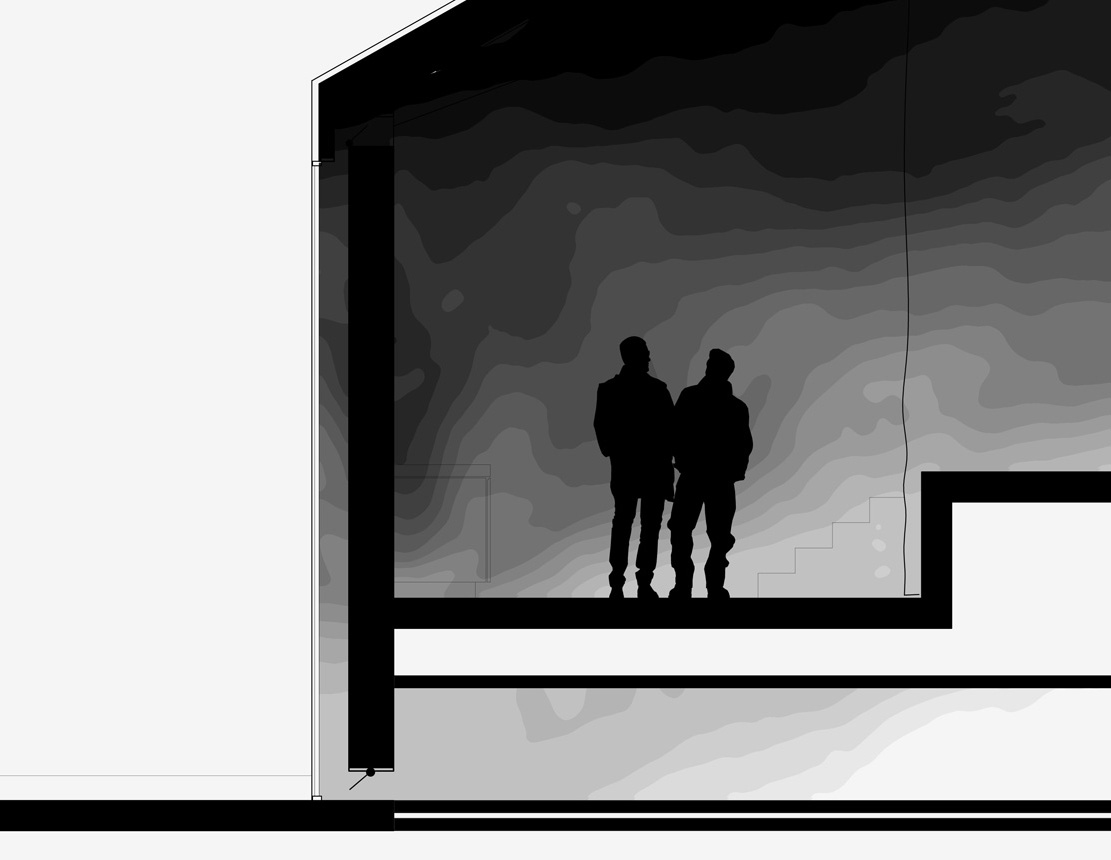 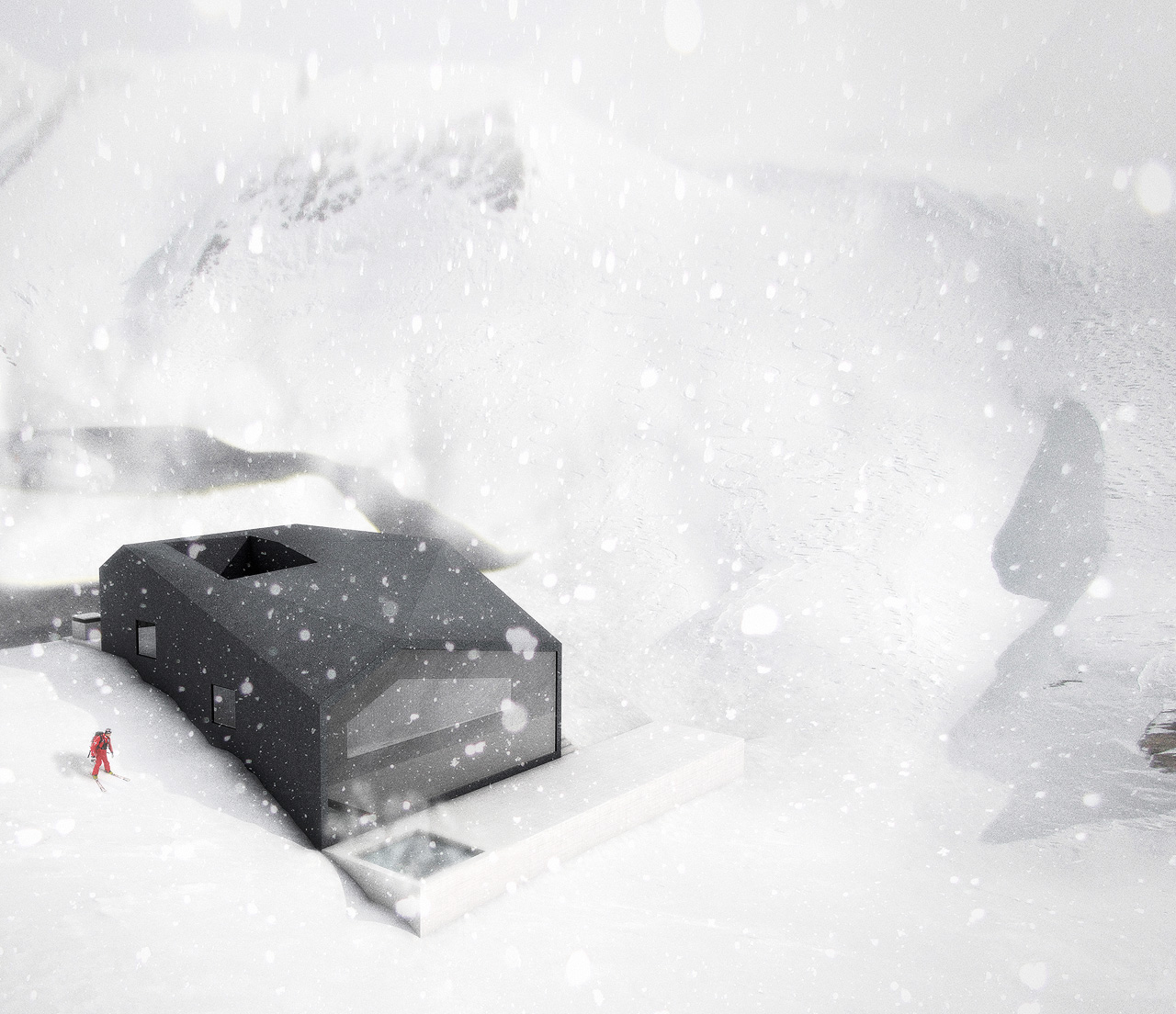 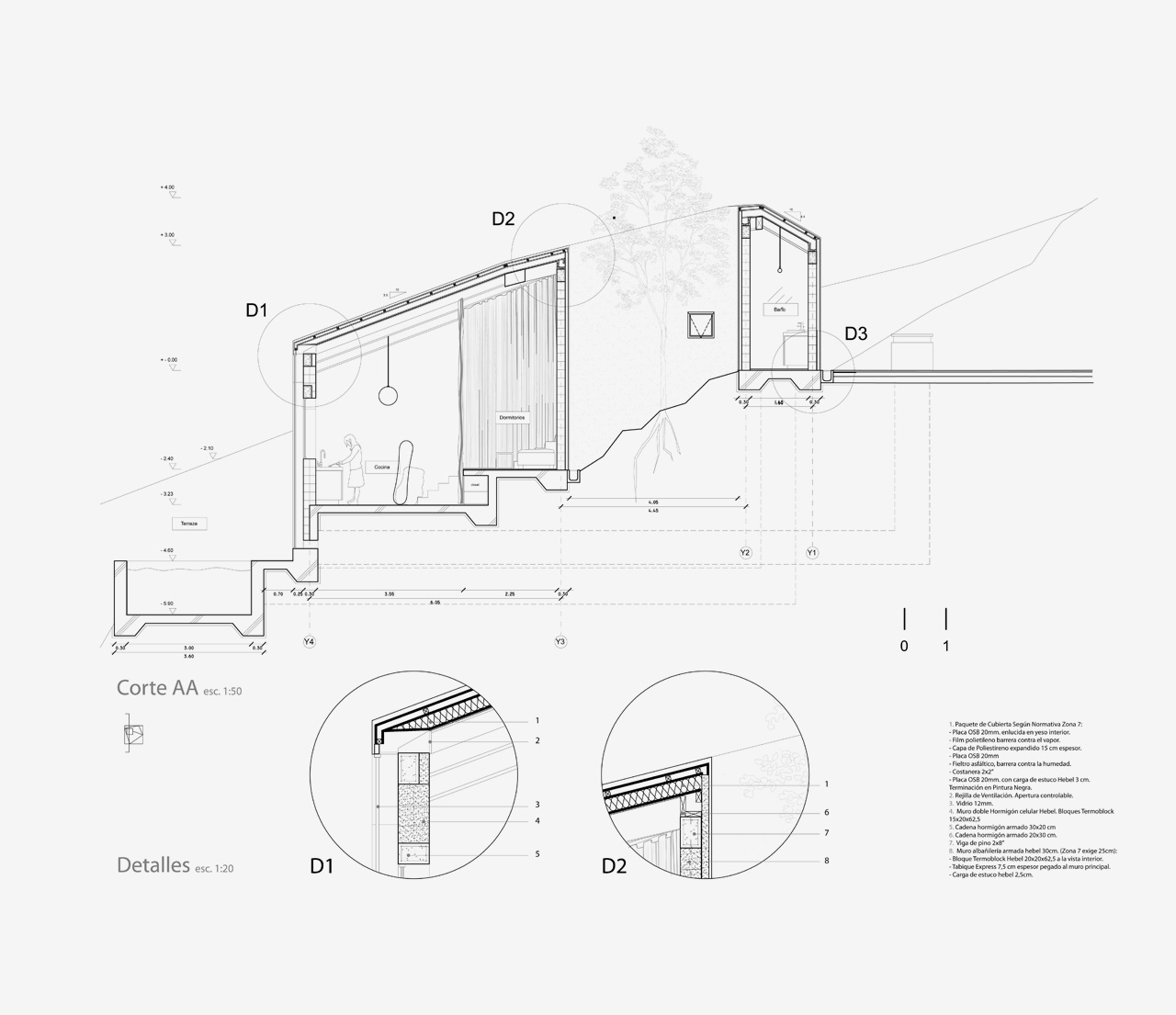 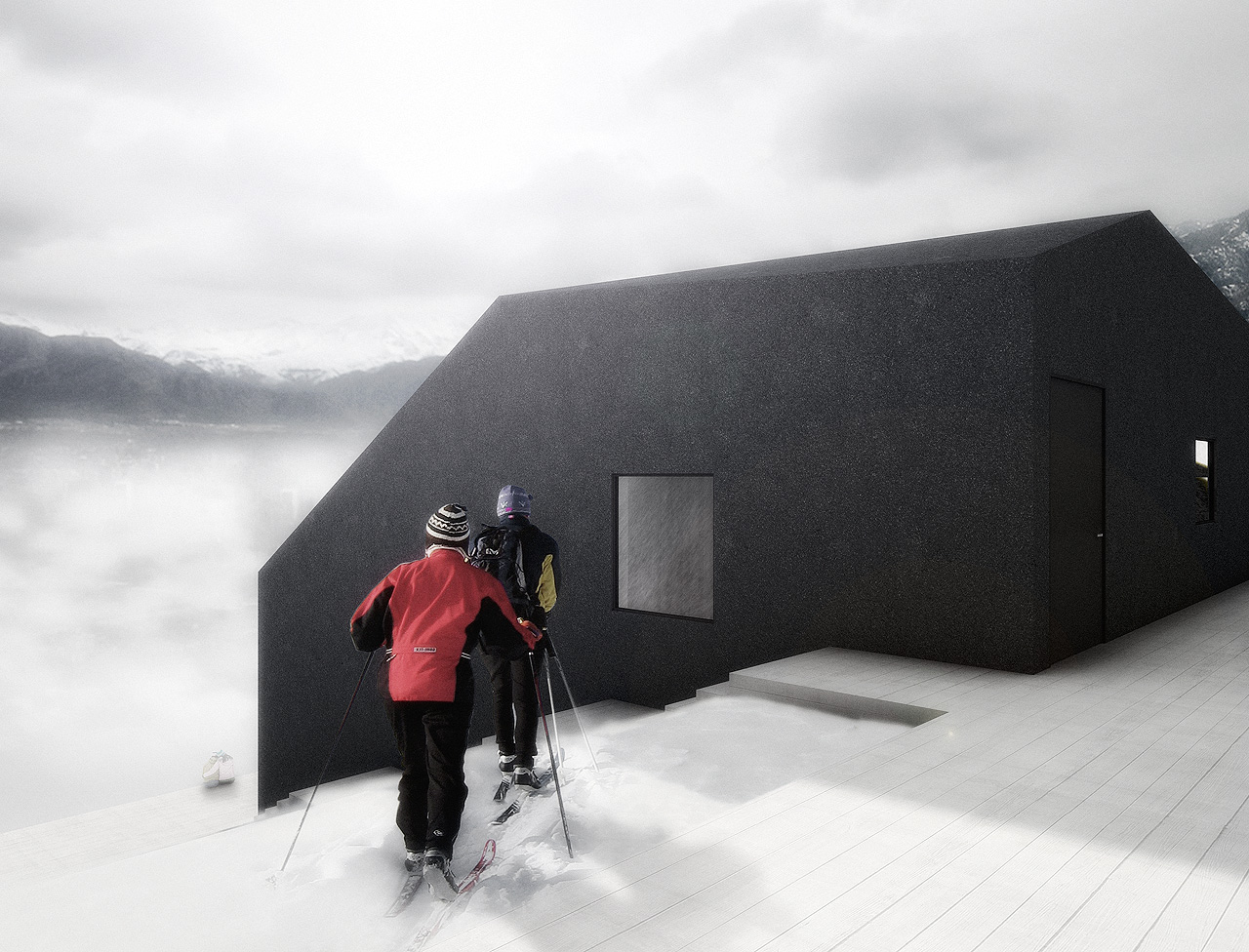 Nowadays, the concept of sustainability is increasingly becoming a major issue in architectural design, in a context of global warming but also exponential energy exploitation. Unfortunately, it is common to find that the answers are more in the application of techniques onto traditional architectural strategies or in developing original but formatted typologies, unrelated to the context and its inherent drawbacks and opportunities.
For the Xella house, we specifically wanted to reply to these two issues, namely creating a new architectural typology ensuing both from a technical functioning and the characteristics of the site and program. Working with the range of Xella aerated concrete blocks, we developed a simple strategy to use in the best way this material various properties.

The program is a mountain refuge, located on a steep terrain. This exemplarily functional and energetic efficient type of vernacular habitat is an indispensable reference for such a project, much more than a traditional second home in the hills. Like a refuge or a traditional châlet, our project fits into the site seeking primarily to protect itself from cold, which can be particularly strong on the hills of Santiago. The refuge, whose function is to accommodate guests engaged in winter sports during the day, has to be a friendly and warm but easy place to use, since its goal is meal and rest.

Thus, the project is organized around a squared plan, allowing flexibility of use and architectural efficiency. This compact design allows a maximum optimization of the Xella blocks but also a very low coefficient of heat loss. To retain maximum heat, the house is settled the closest to the ground, with no overhang. The central courtyard is designed as a buffer space, generating a variation in the organization of the program while providing a significant supply of light and fresh air in summer. The entire house is also really thought of as a full climate. The northerly aspect (the project is located in the south hemisphere), a black roughcast coating and various passive heating devices generate a very pleasant interior atmosphere in winter. The functional distribution of spaces is organized according to the most suitable temperature for each activity, playing with the different levels allowed by the natural slope and with a concentric organization of the program.

This principle leads to a living room and kitchen facing due north with a large bay window, then going up the bedrooms, and in the back finally the bathrooms, due south although with high indoor temperature. The core functions are then grouped in the center of the house, which is warmer, leaving space in the east and west sides. Here, the serving stairs allow air to circulate freely. In the way of a clothe sleeve, the plan of the house is conceived as a succession of layers, which properties varies depending on the requirements of thermal insulation. Thus, the separation of bedrooms and living-room is only guaranteed by a thick felt curtain, pointing to the work and own story of Joseph Beuys, while the patio or exterior walls use various types of Xella blocks, plus a insulating and waterproof coating.

To heat the house, we use two passive systems, coupled together.